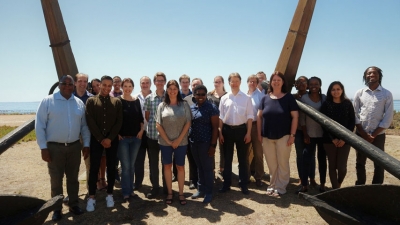 WORKING TOGETHER: The three-day workshop was held at the Cape Town Hotel School.

CPUT recently hosted a successful workshop for South African and German researchers who are collaborating on three bilateral research projects.

The focus of the research projects ranges from topics such as wastewater, to the production of new compounds, but mainly aims to allow for the exchange, training and development of young researchers and PhD-level students.

The three-day event was held at the Cape Town Hotel School and aimed to encourage the exchange of ideas and the development of new collaborations and networks.

It was organised and hosted by Dr Marilize Le Roes-Hill, Head of the Biocatalysis and Technical Biology Research Group in CPUT’s Institute of Biomedical and Microbial Biotechnology.

The workshop was co-hosted by Prof. Tukayi Kudanga (Department of Biotechnology and Food Technology at Durban University of Technology (DUT).

The guest speaker was Prof Emile van Zyl from Stellenbosch University who presented on the lessons learned from working in the ‘bioethanol production’ and ‘enzyme expression in yeast’ space while progress on each of the three research projects was presented during the course of the workshop.

“To all of those who attended the workshop, which also included other researchers and students from CPUT, DUT and UWC, it was a great success, allowing for the free exchange of ideas and the stimulation of in-depth discussions. Potentially new collaborations were established and the workshop team as a whole, are looking forward to future joint workshop meetings,” said Le Roes-Hill.

The projects are jointly funded by the Department of Science and Technology (South Africa) and the German Federal Ministry of Education Research.

Provides coverage for the Health and Wellness Sciences and Informatics and Design Faculties.